Product is not available in this quantity.

Up to 45+
Miles per Charge (estimate)

"Shocked by the level of quality for the price. It’s amazing."
- Jeremy S.
"It's the best purchase I've made in years! Great customer service also!"
- Stephen S.
"This is an awesome bike. Has lots of power and handles wonderfully."
- Joanna P. Don't let the "mini" in its name fool you. Sure, the RadMini can quickly fold when you need some extra room, but this ebike packs quite a punch when you're ready for action and adventure. Power, convenience, and versatility make this rugged space-saver a truly unique addition to any arsenal.

The integrated tire liner is a line of defense designed to provide extra protection against punctures from thorns, glass, and other small materials.

A wider range of gearing at your disposal means more torque for treacherous uphill climbs and maintain pedal authority at top speed.

Powered using the main battery pack and features brake light functionality that is activated any time the brakes are applied.

Raise or lower the handlebar stem to your desired comfort level and take advantage of the folding hinge to make the RadMini as small as possible for storage. 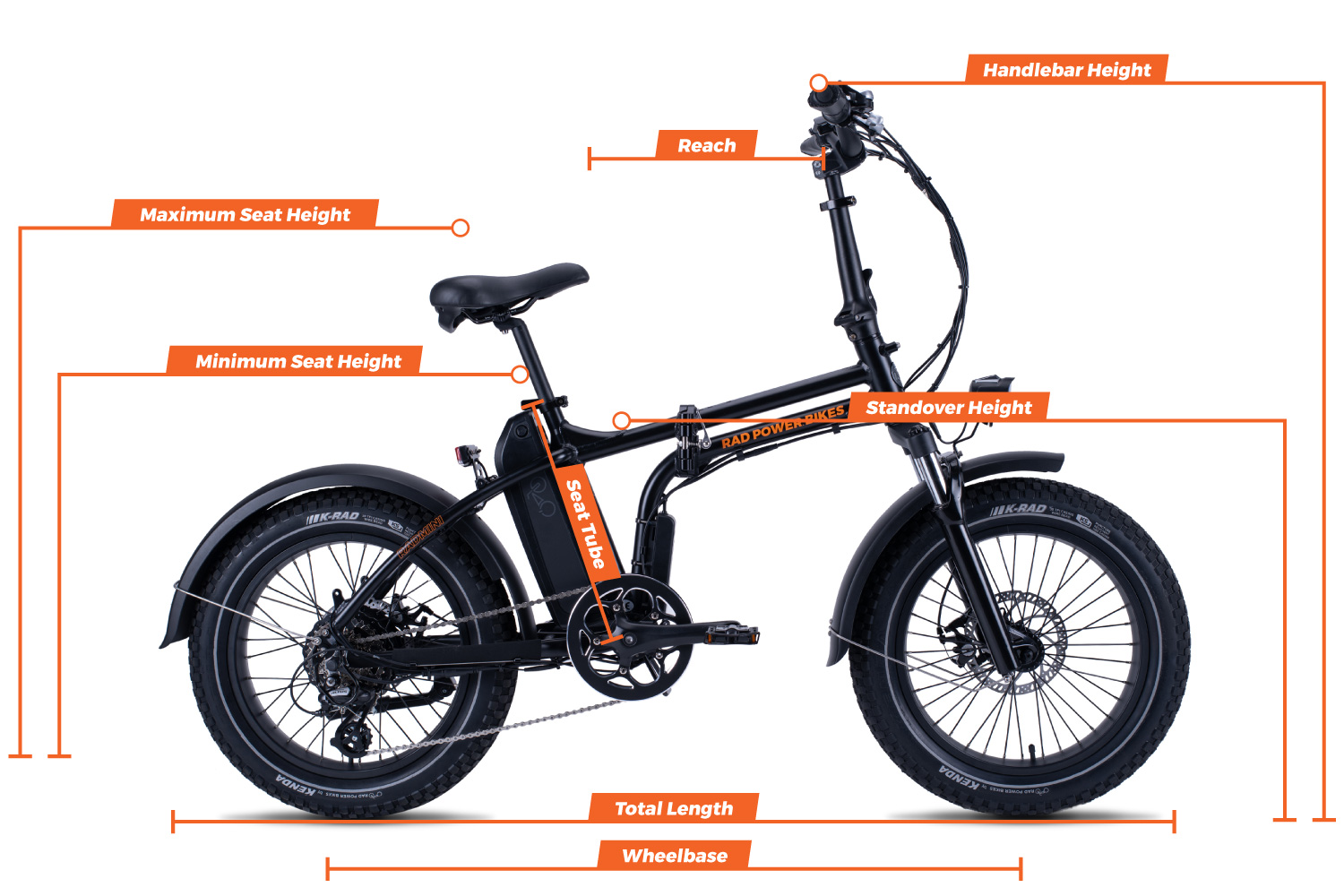 Your “real inseam” -- or inside leg length -- is the distance between your body where it sits on your bike saddle and the ground.

This will typically be an inch or two longer than the length of your trousers, but you’ll want to measure to be sure.

You’ll use this number on the chart to get a feel for how the different models will fit you.

Place a hardcover book against the wall with the spine of the book facing upward. Slide the book upwards towards your groin until it is solidly against your body. This may be a bit awkward, but is way more comfortable -- and safer! -- than trying to ride a bike that is too big.

Battery Life
A fuel gauge for your electrons.

Pedal Assist Level
The higher the number, the more the motor will boost you when you pedal.

USB Charging
5V, 1 Amp port to charge your phone or portable electronics on the go.

Odometer
Calculate how many miles you didn't drive this year and how much money you saved on gas.

Speedometer
Can be set to current speed, max speed, or average speed.

Wattmeter
Shows how much power the motor is outputting at any given time. With over a decade of designing and building ebikes under our belts, we know that a high-capacity battery like this isn’t something you cheap out on. We designed and built our batteries using genuine Samsung 35E cells, which are some of the most energy-dense and reliable lithium-ion cells on the market today. These cells have allowed us to build an overall better battery, and at only 7.7 lb, it's one of the lightest and most energy-dense packs on any electric bike.

With 750W and 80 Nm of torque at your disposal, this Bafang geared hub motor is what is going to help power you up steep inclines and get you up to top speed quickly from a dead stop, all while remaining quiet and inconspicuous. These kinds of numbers aren't even found on some of the most expensive mid drive systems out there, so prepare to outperform and outclass everyone you see on the road. "You may assume the RadMini holds a niche spot in the ebike world; that of a folding electric bike that also has big fat off-road tires. However the RadMini is able to break out of this box and into mainstream appeal by proving itself so useful and safe."
- ElectricBikeReview.com

Looking for something more accessible?

The RadMini Step-Thru 2 is a great option if you want many of the same features as the RadMini but with a much lower stand over height.

I finally had a chance to spend a day on the trails with my Mini. I used to ride singletrack before I messed up my knees. I was pleasantly surprised to ride this bike on some "real" trails again! It's pretty tough and in an odd twist, now the uphills are more fun than the down, ha! The bike is heavy so I get a little anxious bombing the downhill sections....maybe by the fall I'll be there.
Love this bike!

R
R.C.
Riding my Rad Mini puts a smile on my face!

I've had my Mini for several month's and I have to say it has improved my life. I'm 65 and I look forward to taking it for a ride just about every day on our country roads and rail trails.

K
K.L.
Love this Bike but needs fixing out of the box

I already have two Rad Cities (wife and I - absolutely love them) but wanted another Rad for being able to take a grandchild out with us. Went for the Mini Rover because of how it can fold up and the extra torque for when I go on mountain roads for scouting/hunting. Received the bike yesterday and found the following problems during assembly:

1. The front axle bearing races were installed too tight. The wheel was not spinning smoothly on the axle (had this problem on one of my Cities also). Had to use my special wrench (not included in rad tool bag that comes with the bike) to undo the lock nut and loosen the race in order to achieve the desired normal friction fit. If I would not have done this, the bearings would have failed in a short period of time.

2. The front brake caliper was physically contacting the disk rotor making a metal to metal interference. I had to loosen the two allen bolts holding it on and move the caliper out and re-tighten the bolts in order to get clearance. I also had to use the special wrench that Rad sends with the bike to adjust the inner pad in order to achieve proper front brake operation.

3. The rear brake caliper also needed to be moved out as far as possible and even then, the brake rotor is still barely touching the outer brake pad, even though I loosened the adjustment cable so that the caliper is in the fully disengaged position. This means that on my test ride, I had to overcome continuous, slight, braking action on the back tire. To fix this issue, I will have to remove the rear tire, loosen the wheel bearing races in order to move the hub/wheel assembly to the right, and then re-tighten; or fight the brake friction until the outer pad wears a little.

4. One of the allen bolts for securing the fender wires to the frame was defective in that the allen faces were nearly non-existent - making it look more like a round hole rather than an allen hole. As a result, I could not get enough grab with the supplied wrench to install the bolt. Thankfully, ACE hardware carried a near perfect stainless steal match. Bottom line on assembly - You really need to believe the owners manual when they encourage you to have a professional assemble the bike if you don't have the skills to do the above. Otherwise you may be very disappointed on your first ride and damage the bike when you do.

On the operational side - I miss the electronic braking that I have on the Rad-City because it recharges the battery when going down hill with the brake handle slightly pulled. I didn't realize that the Mini doesn't have this feature until I took it out for a ride yesterday. Also, the motor doesn't respond as smoothly to throttle position as the Rad-City. I can hold the throttle in a constant position and the motor power will oscillate up and down slightly. I don't yet know whether this is a problem or if it is just the way the Mini's are.

Finally, on my first ride I went to a friend's house who is interested in getting a Mini if it could fold up small enough to get into his car. We were able to get it into his completely empty Ford Fusion trunk. Very impressive! Looks like he will be the third person that I have turned into a Rad fan.

Can't overstate how awesome it is to have electrical power as the great equalizer when going riding with the wife and grand-kids, and Rad makes a great e-bike.

Most fun Ebikes ever!

I will get a folding step through Rad mini in the fall.

Thanks for everything rad power bikes. I absolutely love my new rad minni. I now have 5 electric bikes and this one is my favorite. It's a perfect balance of quality, fun, perfect all around bike and a great deal. I intend to only buy from rad in the future. Everything about their bikes is great. value for money spent you simply can't do better I would know. If your looking to get the right bike the first time this is it. Go for it You will love it!!!

Have had it for almost a month! Love being able to get around town without struggling on the hills. This bike has changed my life.

Got a Rad 4 for my 60th and it is too easy so I have to ride more to get the exercise I need. And I still look ?? riding it! Easy to fold and stuff in my trunk for far away rides.